Following the seasons and drawing on nature for inspiration is the key to more sustainable floral design.

As with food, the key to being more sustainable is to follow the concept of ‘local and seasonal’.

With flowers, this means that we source produce as close as possible to where we live and follow the natural flowering seasons of each variety.

In the same way that freshly picked tomatoes are at their best at the peak of late summer/early autumn, flowers always have extra sparkle when they are harvested at the time nature intended them to bloom.

When we follow seasonal patterns, prices are at their lowest, produce is at its peak and the environmental footprint is kept as low as possible.

Part of being more sustainable is accepting that at certain times of the year, flowers will be in abundance, whereas at others, we must get creative with fewer choices.

The four seasons of temperate zones

The majority of the world’s population live in temperate zones and experience four distinct seasons – Winter, spring, summer and autumn/fall.

Each continent hosts its own unique range of plant species. These have evolved to cope with the cycle of changing temperatures each year, as well as the geographic characteristics of the local landforms.

But despite huge variations in geography (think desert, rainforest, grassland), the changing pattern of weather is the most powerful force determining when plants will flower. 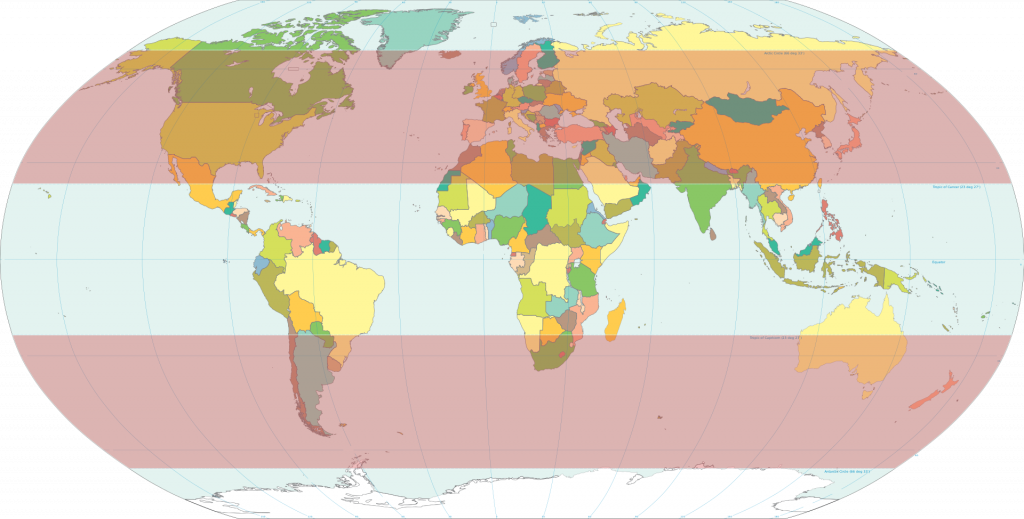 World map showing temperate zones (pink shading), with the tropics either side of the equator.

As the cooler months of winter give way to rising temperatures, the soil warms, bringing plants that shut down during winter, back to life.

Underground, bulbs send new shoots, in preparation for flowering. In trees that have lost their leaves, blossoms and new growth burst through from bare branches, ready to create fruits and seeds for the next cycle of growth.

In spring, commercially grown flowers are in abundance. In early spring, we see jonquils and daffodils, tulips, ranunculus, iris, freesias, and anemones. Flowering branches can sometimes be found in commercial markets – such as blossom and dogwood. Then as we move towards summer, sweet pea, peonies and roses start to bloom where the conditions are suitable.

Foliage is often in shorter supply in spring as the new growth does not hold well after picking and can easily go floppy.

As summer gives way to cooling temperatures, most plants prepare for another period of quiet dormancy.

For deciduous trees, this means that the leaves change colour and eventually fall to the ground, to be broken down into the soil and reabsorbed as nutrients for the next period of growth. Autumn leaves and berry encrusted branches make a spectacular decoration in homes and for events, and as a vibrant flower replacement when supplies become limited.

As roses have their final flush of blooms, the seeds of many species are shed and become buried in the layers of new soil, ready to emerge in spring.

As the cool of winter approaches, we see a dramatic reduction in the number of flowers available in gardens, and in commercial supply. This is often when we see increasing numbers of imported flowers appear in retail businesses.

In temperate zones, many flowering plants go into a state of quiet dormancy, just like some animals go to sleep for winter.

In nature we see bare branches from the deciduous trees that have lost their leaves, and green from ‘evergreen’ plants that never shed their leaves entirely. Decorating with sticks and evergreen foliage is a great way of bringing a taste of nature indoors during the leaner winter months.

The start of winter is the time of lowest supply for flowers in nature.  But as we move through the season, the first narcissus and winter roses (hellebore) begin to appear. Outdoor grown ornamental kale makes a great alternative to roses.

The higher temperatures of summer drive many spring-flowering plants into producing fruit.

Summer flowering varieties must be able to withstand increased heat. Summer sees roses continue to bloom, and they are joined by lilies and hydrangea, lisianthus, gladiolus, delphinium and sunflowers.

In the field, dahlia, cosmos and zinnea and many flowers belonging to the daisy-family flower in later summer and continue into autumn.

Green foliage is particularly vibrant in summer as the leaves have had a chance to harden, with strengthening of the sensitive spring growth. Using lots of foliage in summer events is a great way decorate a room, and bringing simple vases of foliage into the house can help to counteract summer heat with a fresh and cooling atmosphere.

The tropical zone wraps around the equator and is consistently warm. The different seasons are marked less by variations in temperatures than they are by variations in humidity. In much of this area there are only two distinct seasons – the wet and the dry.

Many blooms thrive in rain, heat and sunshine, which is one reason why large scale flower farms are often found in this zone.

Tropical flowers we see sold commercially include heliconia and strelitzia (birds of paradise), orchids and many species of anthuriums. Many long-lasting foliage varieties we see in commercial global markets come from tropical zones, including monstera, philodendron, cordylines and palms.